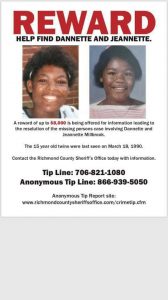 One minute they are there and the next they are not. And so it has remained all these years. So what happened to the these two 15 year old twins, Dannette and Jeannette Millbrook, from Jennings Place, Georgia.

On Sunday, March 18th in the spring of 1990, the Millbrook twins returned home from having lunch at the local Church's Chicken restaurant. They anxiously told their mother of a strange man in a white van that appeared to have followed them better than halfway home on their return trip. Admittedly, not much attention was given to this observation and the girls hurried on with their day. Jeanette changed into some comfortable sneakers but kept her church outfit on while Dannette changed into a white Mickey Mouse tee and jeans. They then headed to their godfather's house on Forest Street in their old neighborhood. They where intending to ask him for some money to help them with bus fares to and from their school.

The girls arrived at  Ted's house, who did indeed give them enough money to last for a week. He also added some change so they could buy themselves some snacks. After leaving Ted's, but still in their old neighborhood, the girls visited their cousin at Tin Cup Lane. They wanted her to walk them home but her mother had said no. So the girls headed out along again. They then went to their older sister's home on Picquet Avenue, who had just given birth. They hung out for 15 minutes and asked if she could drive  them home. Unfortunately, she declined, considering her condition. 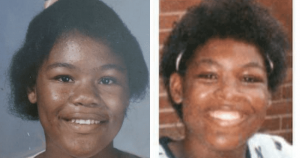 The Millbrook twins left their sister's house and again headed toward home. On the way they stopped at a Pump-N-Shop gas station on the corner of 12th Street and Martin Luther King Jr. Boulevard to spend the spare change on snacks.  They bought some chips and soda, said the woman at the station, who knew the twins and the family. And then, just like that, no one ever saw them again. Three decades later, and still no one has a clue as to what may have happened to the Millbrook twins. credit in part - meaww.com
Prev Article Next Article 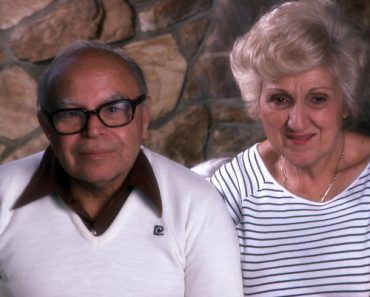